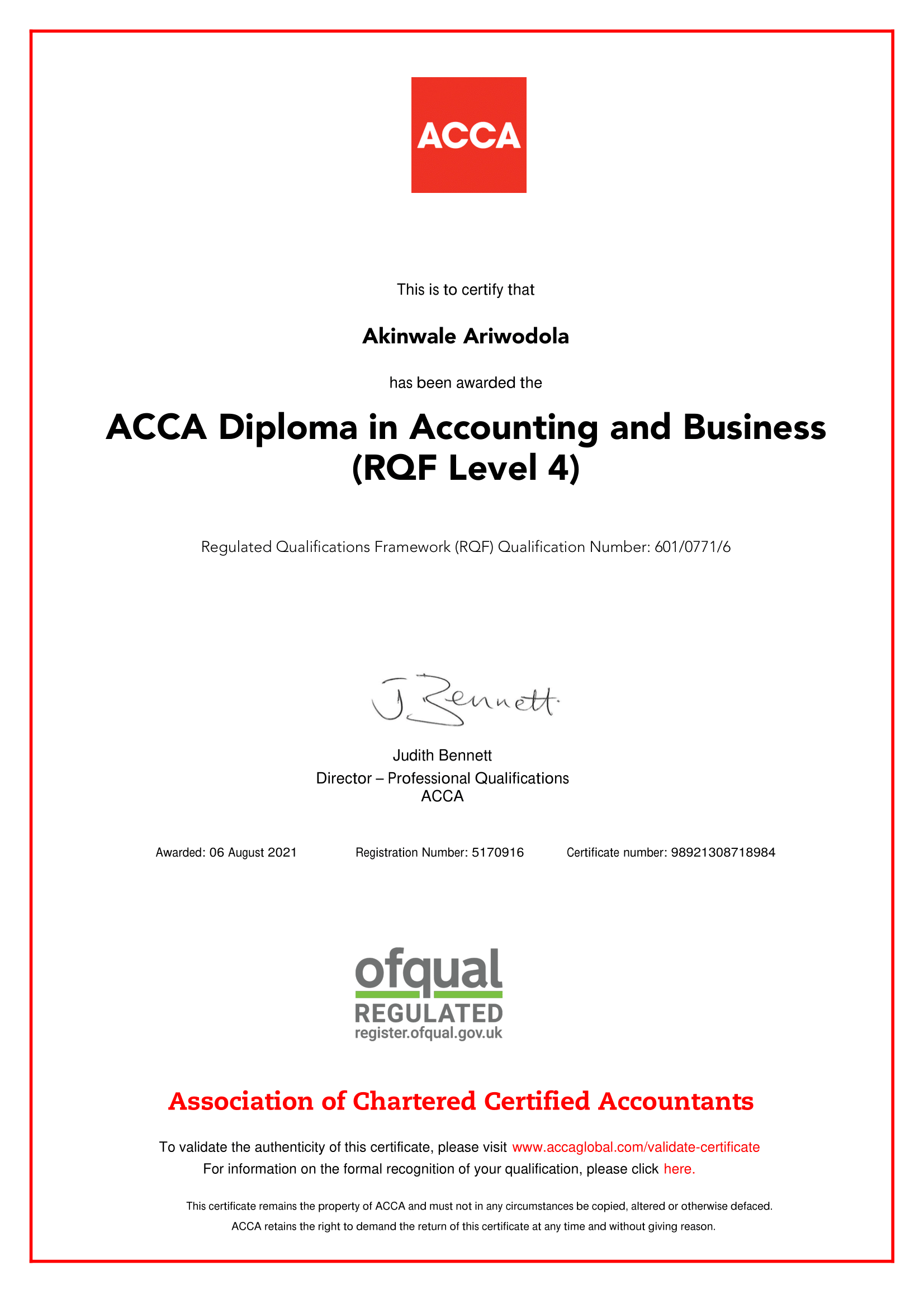 I decided to obtain an accounting certification for a couple of personal reasons, one being that my dad advised me to do so several years ago in addition to my software work. Of course, I ignored him at the time since I didn’t think I would need to do anything else but software, but it looks like I have eventually come around. I was also quite upset by the fact that the Diploma I got from Informatics back in 2005 was pretty much useless for my purposes, so there was a bit of anger driving my determination.

After doing some research, I decided to start off with the ACCA diploma, seeing as it was possible to get it done in the shortest possible time (6 – 12 months on the ACCA website, but some individuals on various Internet forums posted they were able to get it done within a couple of months). There are 3 exams and an online module that need to be completed in order to get it done. I signed up as an ACCA student on the 15th of July using the Foundations in Accountancy (FIA) route, which cost £36, got approved on the 16th of July, finished the online module called Foundations in Professionalism the same day, and scheduled and paid for my first exam on the 23rd July.

To backtrack a little, let’s go over what the 3 exams are. Numerous posts on the Internet refer to these exams F1 to F3, but here are the actual names (they are all prefixed with F if you go through the foundation route).
F1 – FBT/BT – Business & Technology (formerly Accountant in Business)
F2 – FMA/MA – Management Accounting
F3 – FFA/FA – Financial Accounting

The 3 exams are available as on-demand computer based exams (CBE), and can be taken at any time, with a 50% pass mark on each of them, so I decided to tackle just one at a time just to test the waters. The first one I booked was the hardest one, FFA, since it had the lowest pass rate (70% as at July 2021) compared to the others. I paid $69 for the ACCA-X FFA course, and went through 10 weeks of course material within a week (over a weekend and most nights). I understood most of it and then proceeded to fail the first exam by scoring 49% (partly due to some stress caused by the British Council exam centre, which we’ll get to later, and I did not have a calculator because I wrongly assumed there would be an on-screen calculator provided by the CBE software). It turns out there are questions that tend to be worded in ways that trick you if you don’t pay attention.

One other important piece of advice that I ignored was to do practice / mock tests before the exam. I assumed since I already answered the questions at the end of every session in the course, I would be fine. I then proceeded to purchase 3 practice tests (available from the myACCA dashboard for £14) and scored 60%, 65% and 66% respectively. One thing the practice tests are really useful for is identifying where you’re likely to make mistakes and to be able to identify the trick questions. They also indicate which parts of the syllabus that you need to focus on for revision purposes. Another thing to keep in mind is that the practice tests seemed to be easier than the actual exam, but that could probably be due to the combination of questions you get from the question bank.

I decided to retake the exam on the day I failed, so I booked another session at a different centre the following Monday, July 26th and I passed with 55%. I decided to move on to FMA (second hardest with a 75% pass rate as at July 2021), paid $69 for the ACCA-X FMA course, purchased a set of 3 practice tests (again, proved useful to identify trick questions and where I was lacking) and booked a CBE exam at yet another centre (will cover reasons why later on) the following Monday, August 2nd, passed with 69%.

Finally, I decided to use the free OpenTuition course material instead of paying for the corresponding ACCA-X course for FBT, since it was the easiest of the 3 (highest pass rate). I finished the course material over 2 days, purchased another 3 practice tests just to be sure I was ready, booked a CBE exam for Thursday, August 5th and achieved a 75% score. I was transferred from the FIA (Foundations in Accountancy) path to the ACCA qualification path (you can choose to opt-out of this) with the first 3 exams marked as free exemptions as soon as my results were uploaded to the myACCA portal, and my diploma certificate got issues on August 6th.

This is more location-specific since I live in Lagos, Nigeria. I had an overall positive experience with the CBE centres except for the British Council, which was completely abysmal.

The British Council
The British Council offers the on-demand exams only 3 days in a month, it was the closest centre to home, and I already had some experience with them since I took my IELTS exam there, so booking the first exam there was a no-brainer. They were also the cheapest option. However, several things went wrong.

I did not have a good time, and the 49% fail was the icing on the cake.

Synergy Professionals
I retook FFA here, and the experience was fine, but they only offer exams from 12 noon, and I prefer to take exams in the morning.

The New Synergy Specialists (TNSS)
The furthest from home, and also a decent experience. I took the FMA and FBT exams here. The only complaints I have are table space was cramped, and you have to follow up to get them to email the provisional results.

So what did I learn?

What the future holds

There are only 6 more exams in order to get the Advanced Diploma, so I’ve decided to pursue that, since I found a lot of what I’ve studied so far interesting. I already have the next exam booked, LW (GLO) – Corporate & Business Law. It’s the final on-demand CBE, as everything else is session based (March, June, September or December). It’s a mostly theoretical paper, and it’s got practice tests. Once I obtain the Advanced Diploma, I may explore taking the Strategic Professional exams yet, but I’ll decided when I get to that bridge.

Keeping a single board computer or Arduino powered without interruption tends to be a requirement for several projects, examples including a home automation system,...

Well, that’s a long title. I decided to give Xamarin a shot for cross-platform Android and iOS development a couple of days ago which...

Joining the “top 3%” of talent

I initially heard about Toptal 2 years ago, but I never really considered joining because as a freelancer, I just didn’t see the need...